On the last Saturday of October, it was my privilege to attend the 10th Pink Lady Apples annual fundraising event organised by Liza Matthews and Tania Fourie.  The money raised is to be used for the Tygerberg Breast Clinic transport fund, 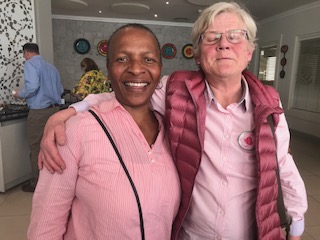 During the year, as part of the Wellness project, (run by the medical students in our breast clinic), we had exploratory conversations with women who had breast cancer.  They were asked about the barriers to care they faced. The number one barrier (40% of all women asked), said transport was their biggest challenge.  We cannot improve the public transport system, but we can compensate them for their fare.

Mrs Frans from the TBH social work department, has taken over from Ms van Eck as the health care worked in charge of the fund. 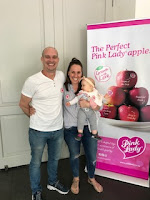 The morning started at 0900 with welcome speeches from Tania and Lisa.  The first person to be thanked was Mike Burton (Rees Dynamic) who co sponsored the day. He was there at the event with his wife, Margeaux and their new daughter, Jess.

Each year, the participants get to do a different craft. This year, Lourens, Colin, Marcell and Marinda from Cape Leather Training treated everyone to a morning making a leather bag.  Thank you so much. 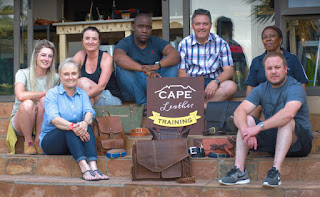 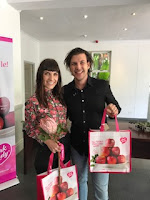 Once the craft part of the morning was over, Esté and Lourens Rabie from the Bottomless Coffee Band played folk-rock and afro-blues for 1 hour. (They prefer to call their music, gourmet music)

Apart from the craft day, Pink Lady apples had 2 other fund-raising initiatives.  Solly Smook, a well-known South African artist generously offered to paint a custom artwork for us. It was auctioned in Johannesburg, and all R48 213 of the proceeds went towards the transport fund.
So, thank you very much Solly!

During October, Pink Lady apple partnered with Pick n Pay and a few suppliers to have a special Pink Lady® apple bag in stores in October. For every bag sold, R1 went towards the fund!  A big thank you to PnP for their support as well.

This is the 10th year of the craft fund raising initiative.  To celebrate, a short video was made starring Myrtle.  No matter what I say, I cannot begin to describe what a difference the transport fund makes to patients.  Thank you Myrtle for sharing your story.

At the end of the 3 fundraising initiatives, the total amount raised was R143 963.  Roy and Marion Jeffery (Top Fruit)  very generously gave an additional amount of money to make the final total to an amazing R150 000.
This bring the new total to R593 000

My personal thanks go to Lisa and Tania.  On behalf of all the patients you will probably never know and never meet, Thank you.