Recent political events unfolding in the USA have launched the concept of "post-truth" into many newspaper articles.  It was voted as the Oxford Dictionary "international word of the year".  They defined it as

"adj, Relating to or denoting circumstances in which objective facts are less influential in shaping public opinion than appeals to emotion and personal belief:

‘in this era of post-truth politics, it's easy to cherry-pick data and come to whatever conclusion you desire’"


The adjective is largely used by political commentators.  However, I fear that we are dangerously close to a post -truth era in scientific commentary and debate.   Widespread access to the internet has resulted in many examples of commentators being able to cherry pick "evidence" to support an opinion.

For the purposes of this blog, I asked my ever-patient husband to give me a possible cause of breast cancer to investigate.  "Suntan cream" was the mumbled answer. 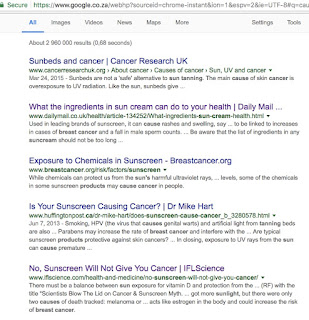 My search resulted in nearly 3m results.  On page one (the only one most of us ever take time to read) there were 2 plausible articles.
One was from the Daily Mail suggesting that there may be a link.
The second was from a site called "IFLScience", a site devoted to the lighter side of science, which suggested there was no link between the suntan cream and breast cancer.

I am often asked to talk about breast cancer and inevitably the question of causality is raised. Had this been a topic I wanted to discuss, it would be reasonable for me to have cited either of the articles and come to opposite conclusions.

After doing some considerable research on the subject, I don't think there is a link between suntan creams and breast cancer.  (That is not the purpose of this blog).  We must ensure that as medical practitioners, we guard against  "cherry picking" articles that reinforce our opinion rather than accurately represent the facts.  It takes time and energy.  As an increasing amount of data is published on the internet, working out what is fact and what is fiction will become more difficult and time-consuming.

However, if we don't do that, medical science will be trumped as well as politics!