Young women discussing their decisions to have a mastectomy

Last Friday, the hospital had their annual breast cancer awareness day.  Each year, we try and focus on different aspect of breast cancer.  This year, the focus was on young women who had decided to have a mastectomy.  Four young women spoke.

Helena was the first to speak.  Just before she was diagnosed with breast cancer, she had started a new relationship.  She felt that her diagnosis was some sort of punishment: some repayment for her sins.  What should her new partner do?  Should he stay or should he go? Her biggest concern however was her daughter.  She is a single parent.  How would her daughter cope?

Zoe, her daughter, was with us for the morning.  It was her 10th Birthday.  What an amazing and engaging child.  Once her mother had stopped speaking, she came to the front.  I asked her what advice she would give a child going through the same thing and she said "It will be alright in the end".  Helena told us how important her friends had been in getting her through.

There wasn't a dry eye in the room when Helena and Zoe had finished speaking.


Clare took over. She was in her early 30s when she was faced with the decision as to whether she should have a mastectomy.  She took an analytical approach to the whole process.  She researched the topic as much as possible. What were her chances of recurrence with her different treatment options? What were the effects of reconstruction.  She summarised her experience by saying it made her a better feminist: she became less judgmental of decisions taken by other women. 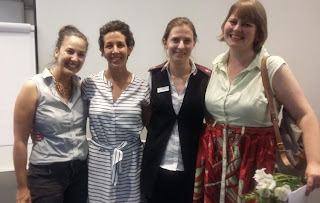 At the time that Elizabeth was diagnosed, she had a 3 year old boy.  She was planning to have another child and was ready to move to a family sized house.  The diagnosis of breast cancer catapulted her into a different life trajectory.  She became closer to her religion and learnt to ask for and accept help.  She described the disease as being levelling and humbling.  She described despair as the antithesis of hope.  Steve, her husband then recounted his experience of having been a cancer survivor.  We asked him to give other partners some words of wisdom:
"Don't underestimate Forries" "Express your fear and get it out""Book a holiday" "Focus on the other side"

Last but not least was Danilla.  Although she hasn't had cancer, she has inherited the BRCA mutation. She has seen her relatives get breast cancer and knows she has an 80% chance of developing the disease.  She had an enormous fight with the medical funders.  Her medical aid seemed to think it was fine for a 30 year old (who needed a bilateral mastectomy) to have the surgery with no reconstruction... After a 3 year fight, she eventually got a reconstruction.  She said that many of her friends felt the step was too drastic.  However, she feels an enormous burden has been lifted from her and that her decision has been validated.

It was such a privilege to listen to their stories: to hear about the experience from the other side. Please share yours.