In 1981, I was in Washington.  Just as I was about to cross a road, I was swept to one side by the police and the access to the road was closed.  I waited to see what was about to happen.  After about 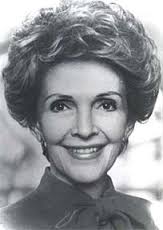 5 minutes, numerous police cars and a large black car with tinted windows swept past.  In the back was sitting a very elegant woman: Nancy Reagan.  She looked at me and waved.

She became very well known for her anti drug crusade but she made a significant impact on the lives of many women before then.  In 1987, she developed breast cancer and was treated with a mastectomy.  At the time of diagnosis, she apparently said, "I guess it is my turn".  She was referring to the fact that the former first lady, Betty Ford, had also had breast cancer.

She was one of the first advocates for breast screening and many women who are breast cancer survivors today can thank her for her public stance.