I am often asked if I find my job depressing.  I don't.  one of the reasons is that I enjoy catching up with women I have treated at a different stage of their lives.  Nearly ten years ago, Janet Gourand came to see me as a patient.  Recently, she returned to see me and told me about her new project.:World Without Wine. She asked me whether she would have got breast cancer if she was a teetotaller.

As New year's Eve approaches, I thought it would be a good time to post her blog

"Back in 2006 I was diagnosed with breast cancer – although almost 10 years ago I can remember that day as if it was yesterday.

"I was sent to breast cancer surgeon Dr Jenny Edge in Cape Town.  She took one look at my breasts and  suggested that I had a malignant tumour in my left breast.  She was very kind and told me gently that I was going to have a very busy day as she sent me round the hospital to have various tests to ascertain if the cancer had spread – fortunately it hadn’t although it was in my lymph nodes, many of which had to be removed along with my breast.

"One of the ways I coped with my year of treatment was by blogging – my blog is still up there in cyberspace under www.breastcancerbattle.blogspot.com

"I was vaguely aware of the fact that there was a link between alcohol and breast cancer but that was not something I wanted to dwell on when coping with my diagnosis and the tough treatment regime that followed.

Compared to women who don’t drink at all, women who have three alcoholic drinks per week have a 15% higher risk of breast cancer”

"Now that almost a decade has passed I felt brave enough to talk to Dr Jenny Edge about the possible link between alcohol and breast cancer.

"Her first words were that “its complicated” and she reminded me that the biggest risk factors are being female and getting older!

"Having said that Dr Edge was kind enough to share with me some key points from a recent presentation she had made at the University of Cape Town:-

-  Alcohol metabolises into acetaldehyde which can damage
healthy cells

-       Alcohol could affect the response of the breast to circulating
estrogen 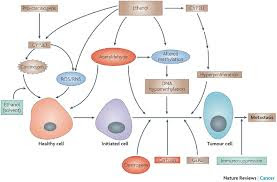 "Conclusions of this significant study were that “low levels of alcohol consumption were associated with a small increase in breast cancer risk, with the most consistent measure being cumulative alcohol intake throughout adult life.” 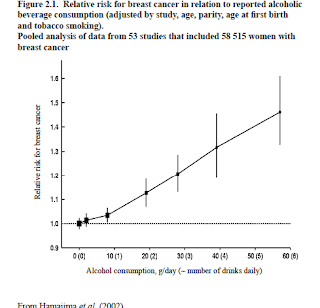 "There was no statistical difference found between:-

"So I can see why Dr Edge says “it’s complicated” but if I could give some advice to my younger self I think it would include some tips about drinking moderately.  As a result of recent research the “safe” levels for alcohol consumption are likely to be reduced in the UK.  Currently 14 units a week – that’s just one and a half bottles of wine!  Let’s hope that SA will follow the UK example – and lets hope that people will actually follow that advice!"