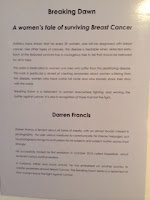 On the first Thursday of every month, Cape Town's art galleries stay open until late.  The city becomes very busy with many people visiting galleries and sitting outside cafes eating and drinking.  Last Thursday, Darren Francis opened his exhibition, Breaking Dawn, at the Young Blood studio in Bree Street.

Darren is an enthusiastic amateur photographer.  Some months ago, he contacted us and said he wanted to do a photographic exhibition featuring women who had survived breast cancer.  We put him in contact with some of our patients and last Thursday, we saw the completed project.  Breaking Dawn is his second exhibition

The programme started with Darren giving the background to the project.  He thanked Studio 22 for their sponsorship.  We then listened to Maureen (one of the subjects) talking about her journey.  She told us how grateful she was as her husband shaved his head in solidarity with her whilst she was going through chemotherapy.

After the speeches, I had the pleasure of meeting up with Natalie Simpson and Michael Redington.  Natalie's mother was the subject for one of the portraits.  She told me that after her mother had had her photograph taken, they had spent a long time talking to each other about all sorts of issues.  She commented that it felt like a therapy session.

Not all the subjects were breast cancer survivors.  MaryAn Haefele (radiographer with Morton and Partners) and Miriam Mutebe (breast surgeon from Kenya) were 2 of the medical personnel who had their pictures taken.