At the end of last year, John Bohannan was asked to concoct a study that would show a the problems with online open access scientific journals.  The story is long and definitely worth reading in full.  In summary, 15 people were divided into 3 groups: one group were put on a low carb diet, another on a low carb diet + 1.5 oz of chocolate and the third group ate normally.  They were weighed daily for 21 days and numerous parameters were measured.  The researchers spent the weekend playing with the numbers and showed (statistically) that those eating chocolate lost weight more quickly.

The study is a classic example of bad science.  There are too few people in the group, they are not followed up for long enough and too many parameters were measured to name but a few problems.  Any scientific journal would have thrown it out straight away..surely!

They managed to show that those eating additional chocolate lost weight faster (it was probably just a chance observation) and they submitted the paper to numerous fee paying open access journals.  Half rejected it straight away.  However, many took it and the "International Archives Medicine" published it without changing it. 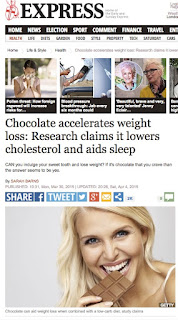 From there, it was taken up by many newspapers and magazines including the Bild.  The world wants
to hear that they can eat chocolate and lose weight.  Good news in the dietary world travels fast.

What are the take home messages?  There are many points to be made;
-Breast cancer sites abound with dietary advice.  How many of the recommendations are based on sound science?
-Health reporters are often very sloppy and don't do their research.  Some years ago, I was quoted verbatim in the now defunct magazine "Real Simple" commenting on lung cancer.  I know nothing about lung cancer.  The researcher hadn't contacted me and had taken comments I had made about breast cancer and quoted them in an article about lung cancer: she had got her organs muddled up!
-People want to read what they want to hear.
-There are more and more open access journals being launched.  Many will charge a fee from the authors to get their papers published.  Not all of them are peer reviewed meaning not all of the the "science" is checked by experts.

Don't be fooled by what you read.