On Friday, it was my pleasure to speak at the Sensitive Midwifery Symposium in the Midrand, Gauteng.  The conference is organised by Lillian Paramor and the organisation is in it's 19th year.  Sensitive Midwifery publishes a magazine on a quarterly basis and this is free for individual subscribers. 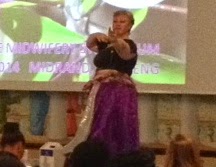 The conference was well attended by 250 midwives.  I was there until lunchtime.  There were a variety of talks but for me, two sessions stood out.  One was a session on role of dance during pregnancy.  The whole group of us were encouraged to do belly dancing.  The session was led by  Debbie Lake.

We went straight from that to a talk on female genital modification (FGM) given by Doreen KM M'Rithaa.
She is the head of midwifery at University Stellenbosch.  The talk was sobering and horrifying.  It is impossible to believe that this barbaric practice is still be carried out in so many countries.  Her ending note was "Lets encourage Genital integrity".

There are 2 other midwifery  symposiums this year: one in Durban at the Suncoast Conference Centre 25-26th July  and one in Cape Town, River Club, 22-23 August.  I can recommend them to any midwife.