Bruce Springsteen has been in Cape Town for the last week.  He played at the Bellville Velodrome which is a relatively compact and intimate venue.  It was packed.  Tickets were sold out almost as soon as they were released some months ago, prompting an additional concert date.  What a wonderful performance. He wooed us and provided us with  3+ hours of nonstop, energetic music.  He sang a moving and memorable version of "We Shall Overcome" as a tribute to Pete Seeger who died this week.  Otherwise, he only spoke a little but noted, 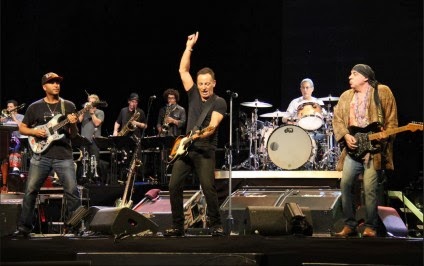 eloquently, how cold the sea is around Cape Town.

How does a 64 year old rock star have anything to do with breast cancer?

During the performance, he picked several people to climb onto stage.  First was a young child.  Then others joined in the dancing.   One woman was led up by Bruce himself, she having held up a sign that said that she had survived breast cancer and melanoma.  She added that she had traveled 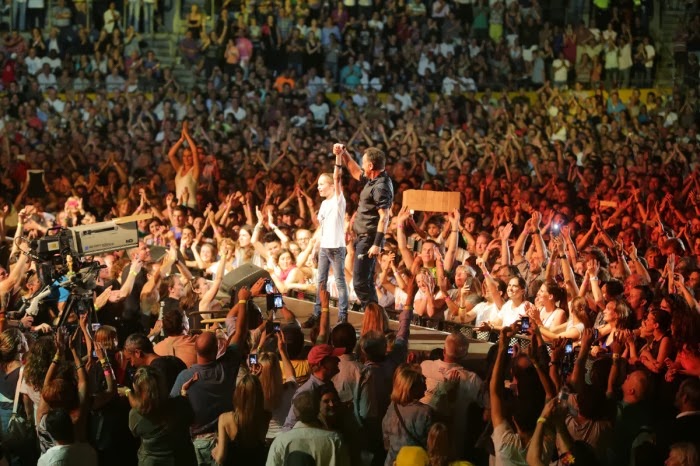 over 6000 miles to see him so I presume she was from America.

I am not sure how I feel about this.  What she did could be seen as inspirational, brave and courageous. Alternatively, it could be seen as using her illnesses to get a pass to be with one of the most famous musicians.  Is it a version of a DIY "Reach for a Dream" which is undeniably a wonderful organisation?  The fact he picked her out of the thousands of other women who would have loved the chance to dance with him says a lot about him.

How do you feel about this?  I would like to say a huge thank you to Bruce Springsteen.  It was certainly one of the most exhilarating concerts I have been to.