It would be impossible to blog from South Africa at this time without discussing the legacy and life of Nelson Mandela.  He was the world's most famous advocate.

In 2001, he was diagnosed with prostate cancer.  He made very few references to his illness.  The only quote I have found was "As a result of the treatment, the doctors took a blood sample and said "Your blood is clean of cancer"".  His disease did not seem to cause him further health issues.  There are millions of cancer sufferers who would love to be able to say the same about their disease.

Last week, I argued that the definition of ADVOCACY should include defining the problem before campaigning for a change.  Mandela spent decades in prison and used that time to study Afrikaans.  He stated that it was important to "Know your enemy and learn about his favourite sport".  His clear understanding of the issues dividing the population of the country made him such a successful negotiator for equality, reconciliation and empathy.

There are so many life skills we can learn from studying the lifetime of sacrifice of Madiba.   During his  imprisonment in Robben Island, he shared his cell with Dr Saths Cooper.  The two did not agree politically.  Cooper said "You could sense his resistance but he would listen anyway.  He was a very good listener and would try and insinuate his viewpoint through a carefully considered question of  clarification or positing another position.  But he listened, he may not have liked what he was hearing, but he listened none the less".

His famous quotes are in all of the newspapers.  What cannot be published is the silence needed to listen. 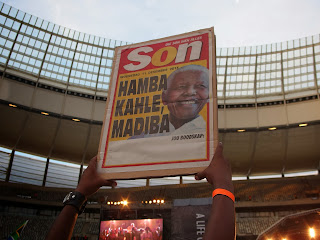